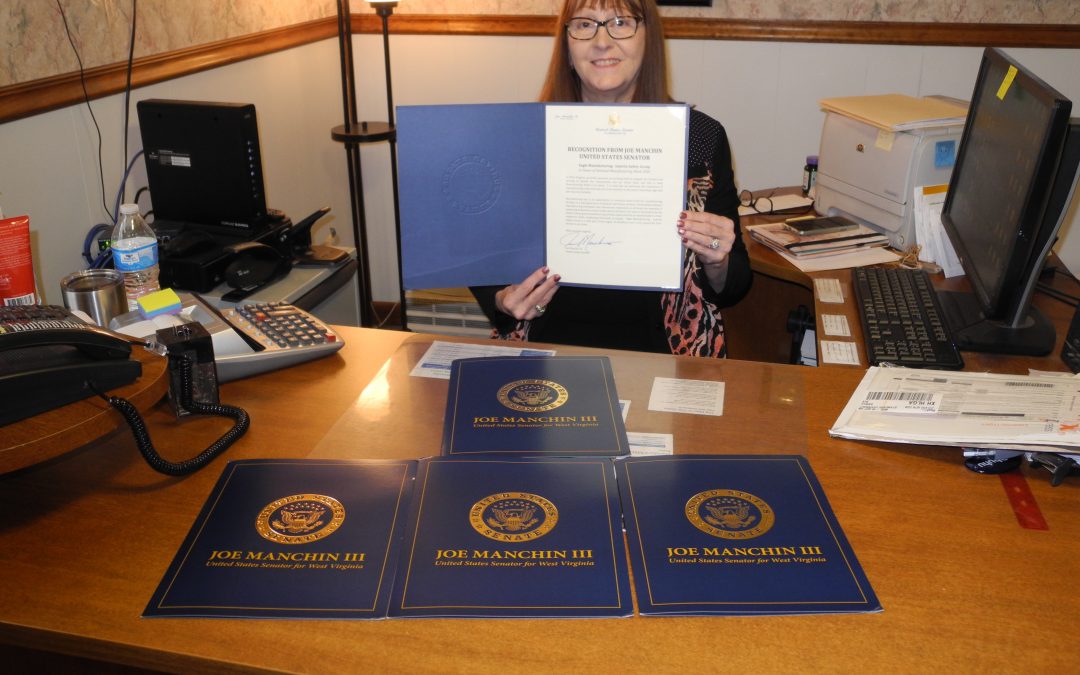 FOLLANSBEE — In observance of National Manufacturing Week, the Follansbee Chamber of Commerce has recognized five local businesses for the vital role they play in the local economy and community.

“We need to be grateful for the industries in our area because they employ a lot of our people. They also support the community in various ways, including contributing to festivals and free concerts in the park, sponsoring scholarships for students and helping us with community projects,” said Chamber President Debbie Puskarich.

U.S. Sen. Joe Manchin, D-W.Va., has joined the chamber in acknowledging Eagle Manufacturing, a division of the Justrite Safety Group; Jupiter Aluminum; Lombardi Development; Mountain State Carbon; and Wheeling-Nippon Steel through a resolution in which he states: “In West Virginia we pride ourselves on working hard to support our families and striving to benefit our communities and our entire state, and that is what Manufacturing Week is all about. It is vital that we showcase the importance of manufacturing to the economy and draw attention to the many rewarding high-skill jobs that are available.”

Manchin noted the occasion offers “an opportunity to introduce state-of-the-art manufacturing facilities to a new generation of students and future workers. Partnerships between manufacturing businsses and educational institutions at all levels are essential in preparing students for careers today and in the future. Our state is fortunate to be the home of many great manufacturing facilities, some of which are world leaders in their respective fields, employing thousands of people.”

Established in Wellsburg in 1894, Eagle Manufacturing is a leading producer of safety cans, safety cabinets, poly drums, materials used in secondary spill containment and other products for the handling of industrial materials. In 2018, it became part of the Justrite Safety Group, another leader in the safety products industry.

Eagle was a founding and active member of the West Virginia Manufacturers Association in 1915 and has remained active in it during the years, supporting its educational fund and establishing the Explore the New Manufacturing campaign to encourage middle school students and others to consider careers in manufacturing.

Dave Harvey, vice president of operations at Eagle, noted that prior to the pandemic, students from Brooke, Ohio and Marshall counties often visited the company’s facilities, where they viewed robotics, 3D printers and other state of the art equipment in use.

“We have shown them how a concept can go from idea to prototype within our plant,” Harvey said.

Jupiter Aluminum has operated in Beech Bottom since 2013, when it moved into the former Wheeling Steel Corrugating Plant. The former steel mill was acquired by the Business Development Corp. of the Northern Panhandle and Hackman Capital Partners and renamed the Beech Bottom Industrial Park.

Established in Hammond, Ind., in 1992, the company recycles aluminum scrap for use in construction materials, including gutters, screens and vents; recreational vehicles, irrigation lines used on many farms and other products ranging from cookware to license plates.

Paul-Henri Chevalier, the company’s chief executive officer, noted, “Since its start in Beech Bottom, Jupiter Aluminum has been investing in its business and strengthening ties within the community. We expect to be one of the largest employers in the area for years to come.”

The company invested a 10-year lease for its space in the industrial park in 2017 and has invested $9 million in renovations to the former steel mill benefiting itself and potential future tenants there.

Lombardi Development was established in 1999 by Follansbee natives Paul and Karolee Lombardi and grew quickly from a small construction company to a builder and renovator of homes, administrative offices, medical facilities, churches, government facilities and academic buildings.

Lombardi Development has headquarters in Follansbee, Morgantown and Bonita Springs, Fla., where it has constructed custom-built homes.

The business was named the chamber’s Corporate Business of the Year for its community involvement, which has included contributions to the Bruins Helping Bruins clothes closet and food pantry and other nonprofit groups.

Mountain State Carbon’s roots can be traced to 1917, when the Follansbee plant was a major supplier of steel for the then emerging auto industry and soon after, military equipment used during World War I.

Today it supplies carbon, stainless and electrical materials for many products, including automobiles, appliances, buildings, culverts, cutlery and cookware as well as heating, ventilation and air conditioning systems, industrial motors and power transformers.

It is one of many facilities operated by AK Steel, a subsidiary of Cleveland Cliffs Inc. As part of the AK Steel Cares program, Mountain State Carbon employees and vendors serving the company have donated hundreds of pounds of food to the Follansbee R.E.A.C.H. Program, a local food pantry.

Monetary contributions to the charity also have been made by the United Steelworkers of America, which represents many of the 265 employed by the plant.

Established in 1986 as Wheeling-Nisshin Inc., Wheeling-Nippon Steel has applied protective, corrosive-resistant coatings to millions of tons of steel used in agriculture, automotive manufacturing, construction, solar power and many other industries.

In recent years, $28 million was invested in the Follansbee plant to allow it to produce ZAM, an extremely durable zinc aluminum and magnesium alloy developed by its parent company in Japan and found in Brooke Middle School and along Follansbee streets and other roads.

The company’s community involvement has included awarding numerous scholarships to Brooke High School seniors and donating $100,000 for renovations to the city’s baseball fields.

Officials with all of the businesses stressed a good education as a prerequisite for careers in manufacturing and construction.

“Students and young adults looking for a career in construction are best prepared if they enter a trade school and/or participate in high school construction courses. Students should seek construction jobs during the summer to gain hands-on experience. Having a strong work ethic with the desire to grow your career through on-the-job experiences will help advance your career quickly. Lombardi Development Company is always interested in hiring individuals who are eager to learn,” said Joe Lombardi, Lombardi Development’s director of business development.

“There’s a very big shortage of crafts people in the steel industry,” he said.

Harvey said Eagle and other manufacturing firms need machinists, electronics maintenance workers and those who can program robots and other machines.

“Those are skill sets we’re always looking for,” he said.