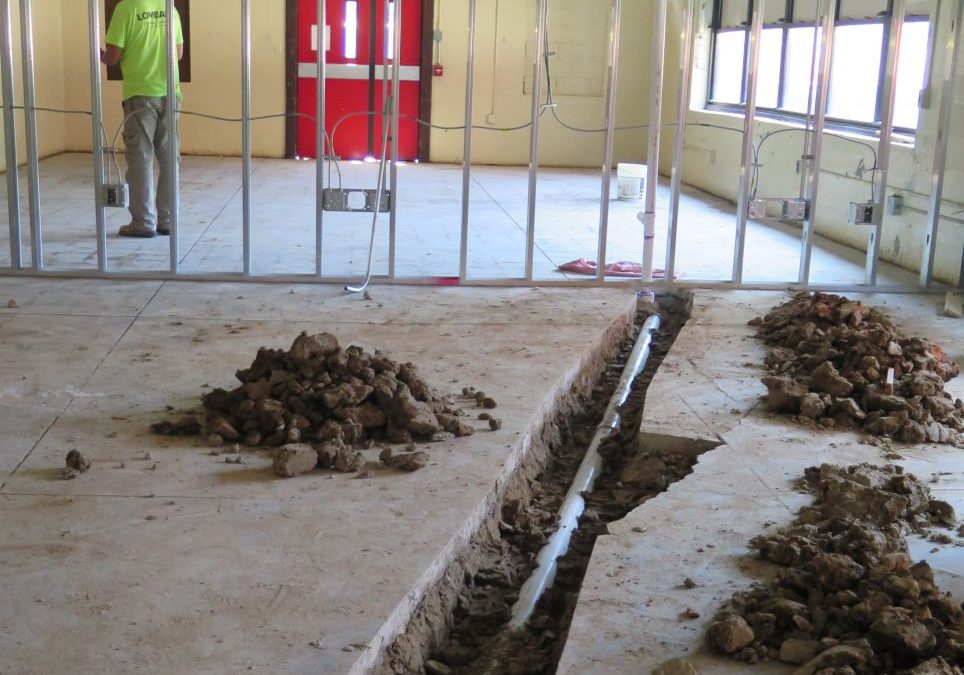 WHEELING — Bridge Street Middle School is getting a new entrance, providing a new look to the facility.

New main doors to the school already have been installed on the playground side of the structure — or what was previously known as “the back of the school,” said Ohio County Schools Assistant Superintendent Rick Jones. A main area for parking is being established close by facing the Bridge Street Plaza, and a sidewalk is being poured to lead visitors to the main entrance.

The work is part of the beginning of $76 million in property improvements throughout Ohio County Schools made possible by a $42.2 million school bond issue passed by voters last year. About $3,126,160 is being directed to Bridge Street Middle School.

At the moment, it appears as if a moat is being constructed in front of the new entrance –but that’s not the case. Jones asked Brian Harto, director of maintenance for Ohio County Schools, why the massive hole in the ground existed, and Harto told him it was so the foundation for the new entrance could be solidified.

Those wanting to enter the school will have to be buzzed in, where they will see stairs leading to the main hallway and a second set of locked doors. This area is called a “man trap,” a security measure meant to keep an intruder from entering the school, Jones said.

To the visitor’s right will be an entrance to the central office, and a window for the school secretary to look out and see who is in the man trap. The secretary will decide whether the visitor will be allowed further into the school.

Throughout the building, classrooms are getting new windows, ceilings, doors, paint and general renovation. Science rooms are seeing upgrades, as our locker rooms and the school’s cafeteria.

The old floor in the cafeteria was determined to contain asbestos, and has now been remediated, according to Jones. Because the old floors previously had not been disturbed, they have not posed a safety threat, he said.

In the basement, a large space is being turned into two learning areas. On one side will be a new place for strings students to learn and practice, while the other side will be a maker space for students.

A new roof also is being placed on the building.

Jones said the former main entrance to the building — on the W.Va. 88 side of the building — will be open in the mornings, and buses will drop students off at that entrance. Once the school day has started, the door will be locked for security purposes.