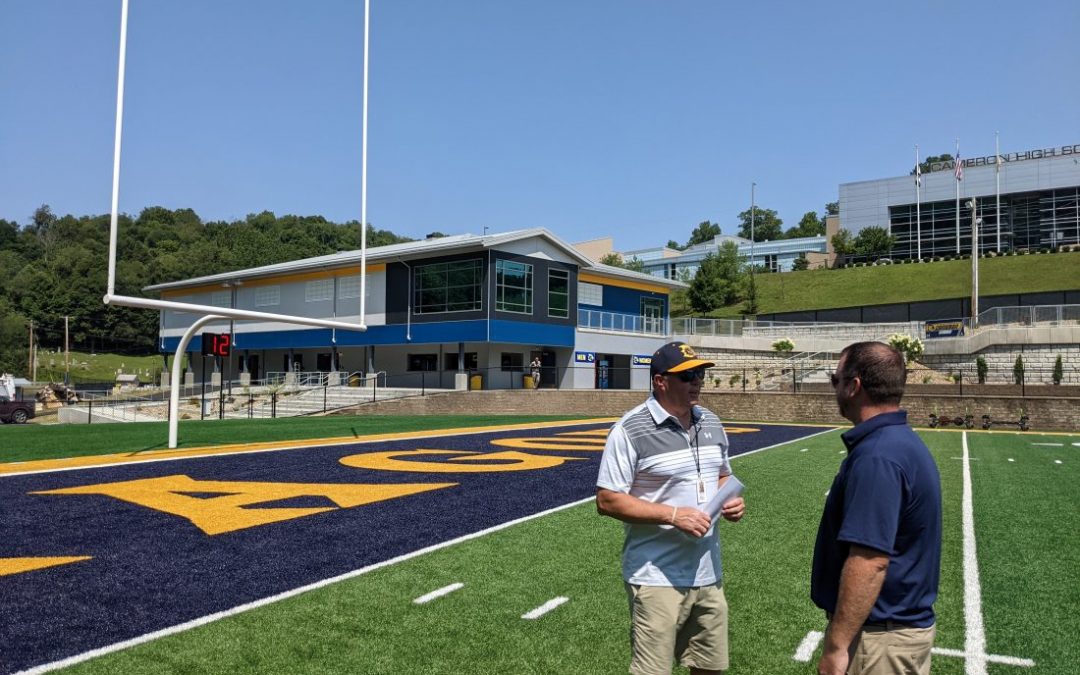 A major overhaul to the adjoining sports facility of Cameron High School is now in its final stages, and school officials are ready to show visitors what the Dragons’ lair looks like on the inside.

Overhauling the Dragon Stadium Athletic Complex began in January 2020, and M&G Architects and Engineers were tasked with a tricky setup — with limited room to expand outward, due to an already tight parking situation, the existing fieldhouse and concession area were instead renovated on the spot and built upward, while additional work was done along the sides of a nearby road to reinforce them. In total, the square footage was increased from around 4,300 to 12,425, at a cost of around $3.2 million. Construction was handled by Lombardi Development Co.

Marshall County Facilities Director Mike Price and CHS Athletics Director Roger Cain gave a tour of the new complex at the Board of Education meeting Tuesday evening. Earlier in the day, the directors did a walkthrough to show off the facility in the morning sun.

“The only thing we didn’t do was replace concrete in the block,” Price said. “Everything else has been re-engineered — we upgraded electric, we upgraded gas, we upgraded lighting, safety alarms, all those things.”

The facility’s upper story had several rooms serving multiple purposes, allowing multiple teams to practice at once. A 103-foot room runs the length of one side of the building, which provides space for an archery practice range, but also a mound surrounded by netting for pitching and batting practice. A large room with high ceilings serves as the central room on the upper story, allowing gymnastics, cheerleading and wrestling. This room is also used for community events, such as junior wrestling. Basketball will continue to be held in the two gyms of the high school.

Prior to the construction of the new facility, Price said, athletes of all stripes had to share the two gyms at Cameron High School, which seriously limited the amount of time available.

“They had to share the gym, and that’s why this is such a needed facility,” Cain said. “Year round, they’re doing all these things, and trying to utilize the same gym everyone else wants a piece of. They tried to schedule time, so the athletic directors’ challenges were, basketball is here until 9, archery maybe until 10 or 11, and with wrestling and everything else going on.”

The second floor also hosts a spacious and modern locker room, with an adjoining coach’s office connecting to a conference room. That room will double as an athletic training classroom. A training room and equipment room round out the top floor.

In the future, Cain said there are plans to establish a Hall of Fame — academic, athletic, and for any other purpose — in the vestibule.

The complex, now two stories, towers over the field, which itself was recently renovated, with turf and high-end material replacing a field that was grass only a few years ago. The field was partially damaged in the floods in June, but after two days of cleanup work, had been restored, good as new.

Cain added that with the pandemic last year, he’s eager to see the field and athletic complex finally be able to welcome returning fans and players at the same time.

Price added that the Cameron community has been fantastic in its support of the project and the Dragons, extending that support to the taxpayers of Marshall County who fund the school district.

“I can’t believe how well-received the community is. They’ve been nothing but gracious during this whole process,” Price said.